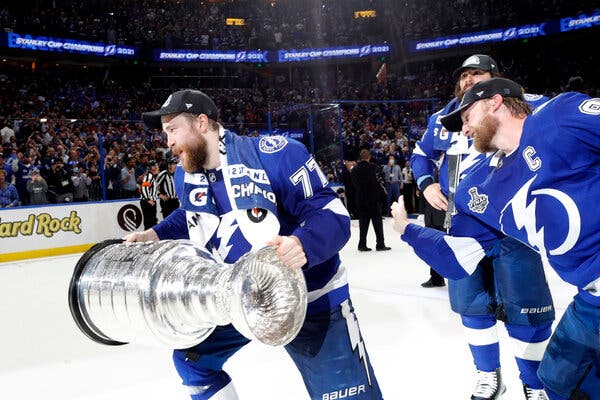 The Tampa Bay Lightning won their second straight Stanley Cup championship in a 1-0 win against the Montreal Canadiens in Game 5 of the Stanley Cup Final on Wednesday despite injuries to Alex Killorn and Blake Coleman. Rookie forward Ross Colton scored with six minutes left to go in Game 7 and that would be all that the Bolts needed to celebrate again

Tampa Bay’s goalie Andrei Vasilevskiy who stole the show was named the winner of the Conn Smythe Trophy as the MVP in the playoffs. Also, Pat Maroon is the first player since Ab McDonald to win the Cup with two different teams for three straight years.

How deep did the Bolts go this year?  Nikita Kucherov had 32 points to join Mario Lemieux as the only players to lead the postseason in scoring two years in a row, and Brayden Point tied his goal total last year with 14 and was one tally shy of tying Reggie Leach for most consecutive goals scored in the playoffs.

Tampa Bay looks to defend its title when the following season starts 3-4 months from now and looks to continue its devoted success.